The Indiana Sired Fair Circuit (ISFC) kicks off Wednesday, June 1 at Converse Fairgrounds in a “Quest for the Governor’s Cup.” This year’s series will make 13 stops before reaching the rich $200,000 Governor’s Cup Championships held at the Indiana State Fairgrounds Thursday, Aug. 11 at 6 p.m. 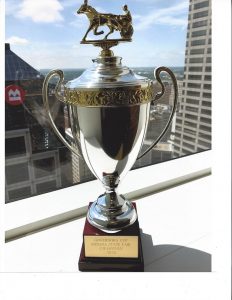 The Governor’s Cup Trophy will be presented during the Indiana State Fair in August. The “Quest” begins Wednesday, June 1 at Converse. Photo by Ellen Taylor

All ISFC races will be available via livestream this season. The link to view all races from all ISFC stops is:  https://vimeo.com/event/2134133. The service will be provided by Mark the Spot, Inc. of Fort Wayne, Ind.

The U.S. Harness Writers Association, Indiana chapter, is doing a big push this year for the ISFC and “The Quest for the Governor’s Cup.” Their membership will be following all races and providing post race press releases as the series moves to the finals at the Indiana State Fairgrounds. Their official hashtag for social media is #Quest4GovCup.

More information is available on ISFC events at www.in.gov/hrc.