It was an Indiana sired fight to the finish in the featured Open Pace Saturday, May 29 at Harrah’s Hoosier Park. Little Rocket Man and Tellmeaboutit finished side by side with Little Rocket Man getting the edge for the win in the $20,000 event. 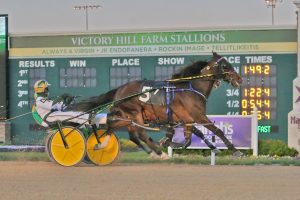 Little Rocket Man and John DeLong hold off a late rally by Tellmeaboutit and Trace Tetrick on the inside in the featured $20,000 Open Pace Saturday, May 29. Photo by Dean Gillette

Starting from post five, Little Rocket Man used some different race strategy in the race. Guided by John DeLong, Little Rocket Man went straight for the lead, tangling with Smooth Lou and Trevor Henry at the first quarter in :25.4 before moving over and taking control to the half in :54.4 to get a breather. The tempo picked back up by the three-quarter pole in 1:22.4.

In the stretch, Tellmeaboutit and Trace Tetrick moved up the inside to challenge, missing the mark by one-half length as Little Rocket Man scored his sixth win of the season in eight starts in 1:49.2, just a tick off his seasonal best. Tellmeaboutit, who paced home in :26.1 finished second over A Fair Ol Dance N who was placed back due to a break at the finish, moving Smooth Lou up to third.

Little Rocket Man was the favorite of the field, paying $3.80. The Rockin Image five-year-old gelding is owned by Russ Beeman and Jack Freeman and trained by Missy Essig. He now has 23 career wins in 27 career starts and earnings over the $350,000 mark. His career best time was taken last year at four, which was a track record-tying mile in 1:47.2.

Also on the card was the $20,000 Open Trot with Whata Swan and Trace Tetrick earning the win in 1:52.4 over Toy’s For You and Rick Plano. Bridge to Jesse’s and John DeLong finished third.

Whata Swan is owned by John Barnard and trained by Tony Quevedo. The Swan for All five-year-old is now five for 10 in 2021 and his latest win pushed him over the $300,000 in career earnings. The mile equaled his career best time taken last year at four.