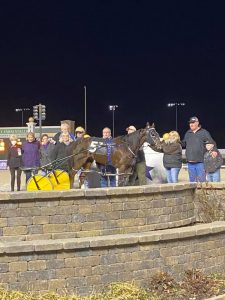 Starting from post five in the six-horse field, Little Rocket Man coasted over to the inside path near the back of the pack as Ana Malak N and Sam Widger turned in the early pace times of :27.1, :55.4 and 1:24.0. The New Zealand invader was feeling pressure at the three-quarter mile marker and by the time the stretch arrived, he had been overtaken by Little Rocket Man, who led the outside charge.

In the stretch, Little Rocket Man was making it difficult for anyone in the field to catch him, posting a final panel in :26.4. In the end, he was a quarter-length winner over Family Recipe and LeWayne Miller. Fan of Terror and Trace Tetrick finished another length back in third.

The competitive field was all right there at the wire. Only two and one-half lengths separated the whole field and every horse but one paced home in under :27 seconds. The final place in the race recorded their time in 1:51.1.

Little Rocket Man was greeted in the winner’s circle by a large group of fans. He is trained by Missy Essig and owned by her father, Russ Beeman and Jack Freeman. Victory Hill Farm bred the five-year-old son of Rockin Image, who is the son of the mare GT Miss Royal, a stakes winner during her own racing career.

The win by Little Rocket Man also signified a milestone in his career, pushing his career earnings over the $300,000 mark. The gelding is now 19 for 31 in his three-year racing career and possesses a career best time of 1:47.2 taken last year at Harrah’s Hoosier Park. The mile also equaled the overall track record, tying the barrier set by Sweet Lou.