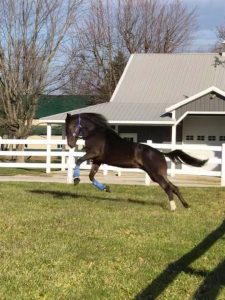 Little Rocket Man enjoys some time out in the field following his last start of 2021. Photo by Missy Essig

Trained by Missy Essig, Little Rocket Man was driven exclusively by John DeLong in all 25 starts this year. A total of 20 of those were recorded at Harrah’s Hoosier Park with his largest win was in the $70,000 final of the Indiana Sires Stakes during Hoosier Champions Night. The gelding turned in his best earnings year to date, scoring $258,915 for 2021. His career stats line is now 32 wins in 54 starts with more than $547,000 in career earnings. Little Rocket Man’s best time remains at 1:47.2 taken as a four-year-old last year at Harrah’s Hoosier Park. Russ Beeman and Jack Freeman own the standout Indiana sired pacer. He is now enjoying some time off in the field.

Finishing second in wins for the season was another tough standout throughout the season Whata Swan. The trotter from the Tony Quevedo barn won 13 of 29 starts and just over $200,000 for the year. John Barnard owns the Swan for All five-year-old who also turned in his best year to date with more than $231,000 of his $461,000 bankroll earned this year. Overall, he has 30 wins in 95 starts.

Rockin Nola was the top mare of the meet, winning 12 of 22 starts at Harrah’s Hoosier Park. The Rockin Image five-year-old mare, trained by Joe Putnam, earned a new lifetime mark of 1:48.4. She now has more than $764,000 in earnings for her connections, JP Racing and Suttons Bay Racing. Joey Putnam drove the mare exclusively during the season.