There have been very few miles under the 1:49 time barrier this year and Little Rocket Man has recorded two of them. The four-year-old Rockin Image gelding soared to victory in the $15,000 Open Handicap Friday, July 17 at Harrah’s Hoosier Park. 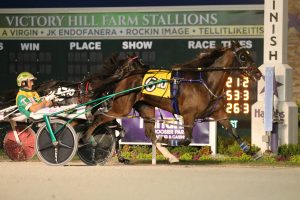 Starting from the outside post in the six-horse lineup, Little Rocket Man eased over to the inside as Fan of Terror and John DeLong and Ana Malak N and Sam Widger vied for the top spot early on, passing the quarter in :26.3. Tellmeabout it and Michael Oosting then got into the mix and secured the top spot at the half in :53.3, leading the way into the stretch. Ana Malak N was back out to challenge a second time while Little Rocket Man inched up on the outside for Trace Tetrick. In the late strides, Little Rocket Man paced home the quickest final panel to get the win in 1:48.3, a final quarter in :26.3. Ana Malak N finished a length back in second with Fan of Terror rounding out the trifecta.

Owned by Russ Beeman and Jack Freeman, Little Rocket Man is now three for four in 2020. He is now on a three-race win streak for trainer Missy Beeman. Earlier this year, he took a new lifetime mark of 1:48.1 at Harrah’s Hoosier Park. In all he has won 14 of 21 career starts with more than $200,000 in career earnings.

Also, on the Friday card were two divisions of the three-year-old pacing fillies for Indiana Sires Stakes. Mystical Carrie was a winner in the first division for trainer Erv Miller. Driven by Trace Tetrick, the Tellitlikeitis filly scored the win by six and one-quarter lengths in 1:50.2. Genie Rockwell and Marlin Fry finished second over Atoritotell and Peter Wrenn for third.

The second division was won by Maggie Rhee and Ricky Macomber Jr. Alwaysatyourplace and Peter Wrenn finished second followed by Somebodyslilly and Michael Oosting for third.

Maggie Rhee earned a new career best time in the second round of the $33,000 Indiana Sires Stakes in a time of 1:51.0. The Jereme’s Jet filly is now six for eight this season under the direction of Tim Wilson Jr. She started off the season in New York where she won her previous wins for 2020. Wilson Racing Stable, Norman Neff and Mark Eichberger all of Illinois recently purchased Maggie Rhee. John Leahy is the breeder.