It was a battle to the finish in the $22,000 Open Handicap Pace Friday, June 3 at Harrah’s Hoosier Park. A three-horse photo determined the winner with Little Rocket Man earning the fastest mile of the meet thus far in 1:48.3. 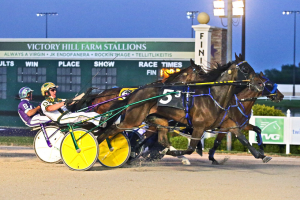 Driven by John DeLong, Little Rocket Man got away last as Beaumond Hanover and Sam Widger left for the lead on the inside and they were joined by Sectionline Bigry and Brandon Bates on the outside at the quarter in :25.4. Sectionline Bigry took over for the middle fractions of :53.3 and 1:21.4 before seeing pressure from Mac’s Big Boy and Trace Tetrick, who were first over. The formation of a second tier also prompted Little Rocket Man to move out third over and get closer to the leaders for the stretch drive.

In the stretch, Little Rocket Man launched into a big final kick, rolling home in :25.3 the snatch the win by a neck over My House and Andy Shetler between horses for second. Sectionline Bigry was another neck back in third. The entire six-horse field finished within three lengths of one another. Mac’s Big Boy and Beaumond Hanover finished fifth and sixth, respectively, and paced their miles in 1:49.1.

Little Rocket Man was not the favorite, paying $7.60 for the win. The six-year-old Rockin Image gelding is trained by Missy Essig and owned by Russ Beeman and Jack Freeman. Victory Hill Farm bred the amazing pacer, who has returned this year stronger than ever. The gelding is now four for six with two seconds and has not finished back of second this year. He matched his best time from last year in the effort with his career best remaining at 1:47.2 taken as a four-year-old. Overall, he is 36 for 60 with earnings over the $600,000.

Another swift mile on the card was turned in by Brookview Bullet in conditioned pace action. Also driven by DeLong, the four-year-old Always a Virgin gelding cut the mile, establishing fractions of :27.0, :54.4 and 1:22.1, pulling away from the field and easily coasting home by five lengths in 1:49.1, a new lifetime mark. Bet Mine and Kyle Wilfong finished second over Fox Valley Gemini and Casey Leonard for third.

Brookview Bullet was the favorite of the field, paying $3.60. He is owned by Eleven Star Stables and trained by Henry Graber Jr. The gelding bred by Brookview Farms is now three for seven this season and has only finished back of third once. He now has 10 career wins and more than $213,000 in earnings. He was a recent purchase by his connections after being campaigned by the Burke Stable as a two and three-year-old.