Talk about a comeback. After winning eight starts this year dating back to early April at Harrah’s Hoosier Park, Little Rocket Man tired to the back of the pack in his last start, the $50,500 Indiana Sires Stakes Leg 4 in late July. A few adjustments by his connections and the three-year-old Rockin Image is back on track, scoring an impressive win in his qualifier in a near career matching time of 1:50.3. 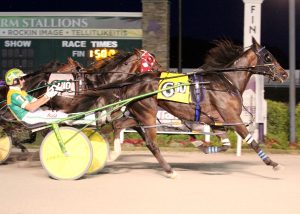 Little Rocket Man and Trace Tetrick are shown winning one of their many races this season in Indiana Sires Stakes action. They turned in a qualifying win in 1:50.3 Saturday, Aug. 10. Photo by Linscott Photography

Trained by Missy Essig, Little Rocket Man and Trace Tetrick went straight to the lead in his return, opening up to a six and one-quarter length victory at the wire, pacing his final panel in :25.2. Tellitsassymae and Sam Widger finished second over Saskatoon and Peter Wrenn for third.