While Indiana Sires Stakes kicked off it’s 2019 season at Harrah’s Hoosier Park Wednesday, May 29, there was another story brewing in the background. Fourteen-year-old Lily Sunderhaus won her first race as an owner with Lionhead in the evening’s final race. 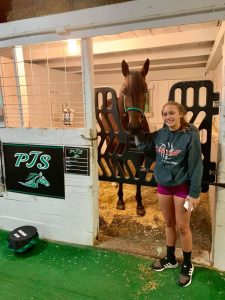 Lily Sunderhaus is pictured with her horse, Lionhead in her father’s barn in Celina, Ohio. Lionhead gave Lily her first win as an owner Wed. May 29 at Harrah’s Hoosier Park. (Photo by Sunderhaus Racing Stable)

Lily and her father, Paul, who is also the trainer, recently purchased Lionhead. The three-year-old gelded son of Uncle Peter has limited racing experience and recently finished second in qualifying action before heading into his race at Harrah’s Hoosier Park.

Under the guidance of LeWayne Miller, Lionhead was not in the mix early, and in fact, coming down the stretch, he wasn’t even in the picture. The focus was on the race leaders in the center of the track. In the final seconds of the race, Lionhead was in full gear on the far outside and trotted past the field for the win in 1:59.2. Bluebird Fancy and Todd Warren finished one and one-quarter lengths back in second over Chai Tea Latte and John Spotten-Morici for third.

The Sunderhaus Stable is based out of Celina, Ohio. Paul has raced in Indiana for more than two decades. He was stabled at Hoosier Park a few summers in the late 1990s before leaving the business for a while, returning as a trainer in 2016. Lionhead is the first horse that Lily has ever owned.