Lil Joe III, a five-time winner on the Indiana Sired Fair Circuit (ISFC) this summer, scored another win Tuesday, Aug. 3 at the Fayette County Fairgrounds in Connersville. The three-year-old pacing colt is also leading the standings this season with 386 points as one more stop is set on the ISFC at the Jay County Fairgrounds Saturday, Aug. 7 before the Governor’s Cup Championships at the Indiana State Fairgrounds Thursday, Aug. 12. 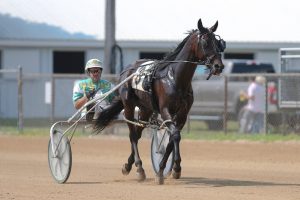 Lil Joe III, shown with Jay Cross at the Elkhart County Fairgrounds, is leading the standings for sophomore pacing colts and geldings in the ISFC. Photo by Dean Gillette

Guided by Gerald Miller, Lil Joe III put post one to work for him and rallied out for the lead, posting fractions of :30.0, 1:01.0 and 1:29.0 before seeing a second flow of traffic on the outside to challenge. The son of Always a Virgin held strong and paced home in :29.0 for the win by one and three-quarter lengths in 1:58.0, the fastest mile of the day. Schwartz Bros Pat and Joey Putnam finished second over Northern Network and Jordan Ross for third.

Lil Joe III is owned by Turrondus Smith of Mississippi and trained by Terry Haimes. He now has six wins in 19 starts for 2021 with his best time of 1:53.2 taken at Harrah’s Hoosier Park.

Lil Joe III has competed in 11 of 13 stops on the ISFC this season. Swartz Bros Pat is ranked second in the point standings followed by My Little Buddy in third. Others in the top 10 on the ISFC Point Standings for sophomore pacing colts and geldings include Vel Letsroll South, Vel Mr Nice Guy (also a winner on the card at Connersville), DD’s Big Joe, Frontier Metis, Northern Network, Fantasy Cruiser and Babes Shooter.

In the sophomore pacing filly division, Sunburst Kada has a strong hold on the top spot with more than 400 points. She has won eight of nine starts on the ISFC this season with her best time taken at Converse in 1:56.3. The daughter of Net Ten EOM didn’t start at Connersville. She is owned by Triple R Stables of Anderson, Ind. and trained by Clay Craib. Sunburst Kada went winless in 13 starts at two and has returned with a vengeance this season.