Lil Day Drinkin is still carrying on the family tradition. The eight-year-old son of Earl of Stormont earned another win Tuesday, April 20 at Miami Valley Raceway. 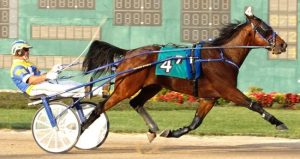 Now owned by Rushcreek Stables of Ohio, Lil Day Drinkin and driver Kayne Kauffman got away in the three hole as Andy Over and Jeremy Smith set the first fraction of :28.1. Kauffman had Lil Day Drinkin out and rolling to the half in :57.3. He immediately found pressure on the outside for the remainder of the race as Southwind Cruze and Brett Miller moved up along the outside to press the tempo of the race.

In the stretch, Lil’ Day Drinkin dug in gamely and held on to the win by a neck in 1:56.1. Southwind Cruze finished second over Andy Over.

Lil Day Drinkin paid $10.00 for the win. Bred by Walter Haynes Jr. and Bob Wientjes, the gelding now has 22 career wins and earnings in excess of $213,000. His career best time was taken at The Red Mile as a six-year-old.

He finds his talent close to home as he is the son of the great Mya Tri, one of the top Indiana sired trotting fillies of all time in the Hoosier State. Mya Tri went a perfect 11 for 11 as a two-year-old for the Haynes Stable and Wientjes and returned at three to win 10 of 11 starts. She ended her racing career with 21 wins in 26 starts and earnings of more than $275,000. Her quickest time was recorded at three in 2008 at Indiana Downs in 1:56.1. Mya Tri currently has a series named after her at Harrah’s Hoosier Park.