For any racing fan who following Indiana action in 2007 and 2008, one trotting filly was etched in their memory. Mya Tri, who went undefeated in 11 starts as a two-year-old and won 10 of 11 starts at three was an Indiana Sires Stakes superstar for owner Bob Wientjes, an accountant in Louisville, Ky. Conditioned by Walter Haynes Jr. the Pining for a Tri filly completed her campaign in 2009 with 21 wins in 26 starts and in excess of $275,000. Wientjes and Haynes converted her to brood mare status and her son, Lil’ Day Drinkin, carries on the family tradition scoring a win at Miami Valley Raceway Tuesday, Jan. 5. 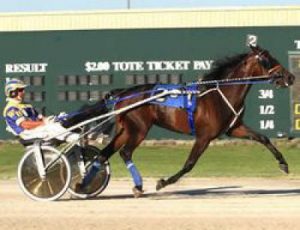 Mya Tri and driver Walter Haynes Jr. are shown winning one of their many Indiana Sires Stakes in 2008 at Harrah’s Hoosier Park. Photo by Linscott Photography

Now under the direction of trainer AJ Carlo, Lil’ Day Drinkin and Kayne Kauffman moved straight to the lead and never looked back, winning by one length in 1:57.3 over Haul N Dash and Tyler Smith. Mr. Charmbro and Trace Tetrick finished third.

Lil’ Day Drinkin was a longshot in the field, paying $11.20 for the win. The Earl of Stormont Indiana sired gelding is now owned by Carlo Racing LLC and was bred by Wientjes and Haynes Jr. It was the first start of the year for Lil’ Day Drinking, making him one for one in 2021. He now has 21 career wins and moved over the $200,000 mark in earnings with his latest win. His career best time of 1:54.3 was taken as a six-year-old at The Red Mile.

Lil’ Day Drinkin is one of five foals from Mya Tri and is the most successful thus far. Her last foal was a filly by Jailhouse Jesse, Offer N Compromise, who is now a four-year-old.