Indiana sired Letsmakithapncapn and Tony Hall turned in a strong performance at Miami Valley Raceway Wednesday, March 30. They were in contention from the start, verifying their favorite status in the claiming pace. 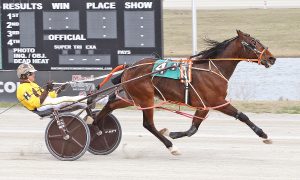 Letsmakithapncapn and Tony Hall rallied from a first over trip to score the win in the first race Wednesday, March 30 at Miami Valley Raceway. Photo by Conrad Photography

Letsmakithapncapn and Tony Hall were strong out of the gate in the center of the track, making their intentions known for the lead early. Extravagant Art and Jason Beattie took over early to set the first fraction of :27.1, before Letsmakithapncapn moved to the outside in first over fashion to challenge. He was parked for the remainder of the mile before flipping three wide at the head of the stretch and rolling home to a two and one-quarter length victory in 1:55.0. Khan Blue Chip, an 11-year-old gelding, finished second for Dan Noble, while 12-year-old gelding Extravagant Art finished third.

It was the third win of the year in 12 starts for Letsmakithapncapn, a six-year-old son of Real Desire. Owned and trained by Roy Murphy Jr., the gelding paid $5.00 for the win. It was the second start for Murphy after being claimed in mid-March. The Dr. Keith Hollendonner-bred gelding now has 13 career wins with more than $70,000 on his card. His career best time was taken as a four-year-old at Scioto Downs in 1:52.0.

Letsmakithapncapn was originally purchased out of the Hoosier Classic Yearling Sale for $8,500 by Don Eash. He competed on the Indiana Sired Fair Circuit before being sold in the Eash annual dispersal sale each fall to make room for younger horses. The gelding was sold following his three-year-old campaign.

Another veteran claimer who had a win on the card was Lil’ Day Drinkin from the Jason Brewer barn. The nine-year-old Indiana sired son of Earl of Stormont rallied late in the trotting event to score the win in 1:57.1 with Tyler Smith at the controls. IC Caviar and Chris Page finished second over Top Dollar and Dan Noble for third.

Lil’ Day Drinkin was a longshot in the field, paying $20.80 for the win. John Fitzwater owns the veteran trotter who was bred by Bob Wientjes and Walter Haynes Jr. The gelding now has nearly $300,000 in earnings and a best mark of 1:54.3 taken as a six-year-old.