Two-year-olds continue to emerge onto the racing scene at Harrah’s Hoosier Park. Letmeincoach, driven by Peter Wrenn, became one of the latest freshman to impress racing fans in two-year-old action Saturday, July 2. 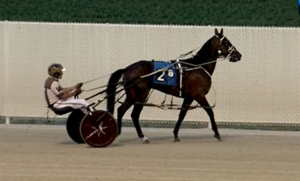 Starting from post two, Wrenn had Letmeincoach well in hand when the gate folded and floated out to get away third as American Cactus and Brandon Bates moved the quickest from the outside to get the first lead by four lengths, passing the quarter in :28.3. Wrenn moved Letmeincoach to the outside and had cleared the lead before the half in :59.1. From there, it was game over. Letmeincoach continued to lead the way to the wire in 1:56.4, a final quarter in :27.0. American Catcus finished second over Raylan and Ricky Macomber Jr. for third.

Letmeincoach is trained by Kevin Miller and co-owned by Bert Hochsprung, Brian Loman, Mark Flessner and Miller. Misty Ridge Stables bred the gelded son of Rockin Image who is now two for two. His latest win marks a new lifetime best.  Letmeincoach is the son of Velocity Vespa, who took a mark of 1:49.0 during her career and made more than $400,000. He was sold under the name Rockin Velocity for $36,000 last fall at the Hoosier Classic Yearling Sale.

Another two-year-old turned in a big mile Saturday. Tell’s On a Roll and Trace Tetrick led gate to wire for the win by three lengths in 1:53.2. The Tellitlikeitis freshman filly rolled home in :26.4 for the win. RNR Lucky Vida and Jordan Ross finished second over Killer Waves and Jimmy Whittemore for third.

Tell’s On a Roll is trained by Erv Miller. She is owned by Ervin Miller Stable, Engel Stable of IL and Louis Willinger. Victory Hill Farm Inc. bred the filly, whose recent score was a new lifetime mark.