Letem Fly Low, the Indiana sired daughter of Rockin Image, kicked off the 2021 racing season at Scioto Downs, Harrah’s Hoosier Park’s sister track, with a win Tuesday, May 4.  The mare won the $6,000 conditioned event in a time of 1:54.0 to set the tone for the year in Ohio. 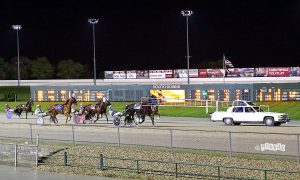 Track Photographer Brad Conrad took a photo of the first race lining up behind the starting gate at Scioto Downs Tuesday, May 4 to kick off the 2021 racing season. Photo by Conrad Photography

Starting from post five, Letme Fly Low and driver Trevor Smith got out of the gate on the five-eighths mile oval and had the lead wrapped up by the quarter in :27.3. From there, Letme Fly Low was challenged on the outside, first by Straightontherocks and then Christina One. Fairy Gold also got in the mix, moving three-wide at the three quarters.

Owned and trained by Anette Lorentzon, Letme Fly Low paid $18.60 for the win. She was bred by Mystical Maker Farms, Peggy Hood and Erv Miller Stable.  It was the first win of 2021 for Letme Fly Low, who has been with Lorentzon since December. The mare originated under trainer Alvin Miller in the early stages of her racing career. She now has 18 career wins in 96 career starts with earnings in excess of $259,000. Her career best time remains at 1:50.2 taken at Harrah’s Hoosier Park as a four-year-old.

Earlier in the day Tuesday, Scioto Downs held qualifiers and Always At My Place, the 10-year-old son of Always A Virgin, won his qualifier in 1:56.3 for Chris Page. Owned by Black Magic Racing LLC and trained by Todd Luther, Always At My Place is a millionaire veteran with a career best time of 1:47.2 taken at four at Pocono Downs. He is prepping to make his first start of 2021 at Scioto Downs.

Also earning a win at qualifiers was Pursuit of Speed, owned and bred by Victory Hill Farm. The three-year-old daughter of JK Endofanera was driven by Josh Sutton in a time of 2:01.2. Debra Garland trains Pursuit of Speed is a first-time starter and the daughter of Glitter N Glitz, who has produced 12 racehorses during her brood mare campaign, including Allthatgltrsisgold, who has a mark of 1:49.0 and more than $824,000 in earnings. He is now a sire in his own right and has produced such racehorses as Golden Paradise and I Am Golden.