Letitrock and driver Zachary Miller scored the quickest win of the day at the Elkhart County Fair Monday, July 23 at Goshen. The duo won a division of the $6,450 Classic XXVIII Pace for three-year-old colts and geldings in a time of 1:57.4. 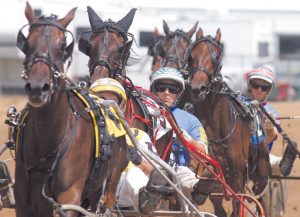 The Goshen News always provides great coverage of harness racing at the Elkhart County Fair. This is a photo taken from 2017. (Photo by Goshen News)

After making a break at the start, Hilltop Ginger and Freeman Miller Jr. pursued the top spot and achieved it at the quarter to lead the first half of the race before being overtaken by King Lil Joe and Jay Cross. Shortly after the three-quarter mile marker, Miller had Letitrock in full gear and shot to the lead, opening up by six lengths at the head of the stretch before moving under the wire for the win by 10 lengths over King Lil Joe. Ramblintime and Gerald Miller finished third.

Owned and trained by Alvin Miller, Letitrock earned his second win of the year. The Rockin Image colt now has in excess of $62,000 for the Miller Stable. It marked three wins on the card for Zach Miller. He also drove Edens Big Dream to victory in a division of the two-year-old colt trot, a horse that he also trains, and Serene Hall for his father, Alvin, in another division of the freshman colt trot.

Other big winners on the day included four wins for the Alex Udell-Jack Myers combination as well as  four wins for trainer-driver Don Eash. Matt Rheinheimer also scored three wins, including a win behind One Cool Cat in the second division of the Classic XXVIII Pace. One Cool Cat was a winner by one-half length over Townline All Good and Gerald Miller in a time of 1:59.2 Frederick and Carolyn Shiery of Michigan own the Real Desire gelding.