Legal Spike, the 10-year-old Indiana sired gelding from the Jamie Macomber Stable, turned in a win in a win in the final race of his career Thursday, Aug. 19. The gelding earned his 32nd trip to the winner’s circle as he ventures into retirement. 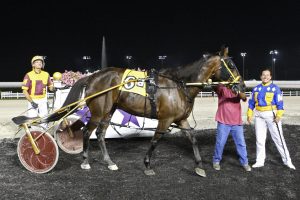 Legal Spike makes his 32nd and final trip to the winner’s circle during his final race Thursday, Aug. 20 at Harrah’s Hoosier Park for Ricky and Jamie Macomber. Photo by Dean Gillette

Starting from post six, Driver Ricky Macomber Jr. sent Legal Spike to the lead from the starting gate, passing the quarter on the outside in :26.2. The veteran racehorse crossed over to the front spot down the backstretch and led the field through middle fractions of :54.2 and 1:23.2.

In the stretch, Legal Spike rallied home and fended off challengers to win by one length in 1:52.1, a final panel in :28.4. Always A Vavoom and Ronnie Gillespie finished second over Ramblin Art and Matt Krueger for third.

Legal Spike was the favorite of the $5,000 claiming event, paying $3.80 for the win. The son of Third Straight is owned by Ricky Macomber Jr. and Eleven Star Stables. Ben Yoder bred the racehorse, who is a half brother to Big Gulp, who recently took a mark of 1:50.1 at Harrah’s Hoosier Park. He is also a half brother to Legal Transfer and Mandy’s Mattjesty, both six figure winners with marks of 1:50.3 and 1:50.2, respectively.

Legal Spike ends his career with 203 starts, earning in excess of $261,000. His career best time of 1:50.3 was taken as a six-year-old at Harrah’s Hoosier Park.  He finished among the top three 88 times during his campaign. With the exception of one season (2019), he won at least two races per season.

Unraced at two, Legal Spike kicked off his racing career under the direction of Ross Leonard at the age of three in 2014. The majority of his career was spent in Indiana. He has been with his current connections since the spring of 2018.

According to HarnessIndiana.com, Legal Spike is returning to his roots to be cared for by his initial handler. He will begin his second career as a pleasure horse soon.