Hasty Grand Slam was a stellar foundation mare for the Stohler family of Markleville, Ind. And, with 18 foals before she was retired from being a brood mare in 2004, her legacy lives on. Numerous wins, numerous champions and many purse earnings later, the famed mare still pops up in breeding lines for horses making it to the winner’s circle 16 years later. 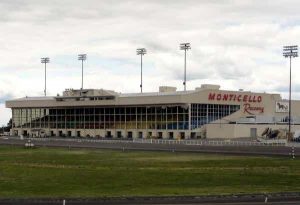 A photo of the grandstand at Monticello Raceway is the location of Hasty Grand Slam’s most recent winner Tell It To Grunyen. Photo by Derick Giwner

The latest horse to emerge as a winner with bloodlines traced back to Hasty Grand Slam is Tell It To Grunyen, who has now won two of four starts at Monticello Raceway in 2020. The four-year-old granddaughter of Hasty Grand Slam was a winner during frigid conditions in Upstate New York Thursday, Feb. 13, winning by two and one-half lengths in 2:00.2, recording her second straight win for her new connections. Purchased by Brenda Messenger in late January, the Tellitlikeitis mare was driven to victory by Jim Taggart Jr. in the $4,600 conditioned pace. Tell It To Grunyen is now trained by Gary Messenger and was bred by Trent Stohler Stable Inc.

The dam of Tell It To Grunyen is Camiana, who took a mark of 1:55.1 during her career. She has had eight foals, seven of which have taken marks of 1:58.0 or faster, including the gelding Wayne The Lefty, who made nearly $700,000 during his career. Hasty Grand Slam is a half-sister to numerous successful racehorses, including the great Extreme Velocity, who was a Breeders Crown winner for the Stohler family in 1998.