Lazarus N, hailed as the greatest racehorse to ever emerge from New Zealand, has committed to make his first start on U.S. soil in the  Dan Patch Stakes at Hoosier Park Friday, Aug. 10. The five-year-old horse was recently purchased by Taylor Made Stallions, a Thoroughbred based breeding operation in Kentucky and arrived in the United States in late May. 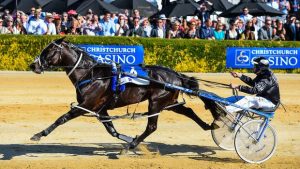 Lazarus N, hailed as the best racehorse to ever emerge from New Zealand, will make his racing debut in North America in the Dan Patch at Hoosier Park Friday, Aug. 10. (Photo by Photosport of New Zealand)

After qualifying at The Meadowlands Saturday, July 28 in 1:48.3 and a final panel in :25.3, Jimmy Takter, who is now training Lazarus N for Taylor Made Stallions, said the Bettor’s Delight horse would be headed to Hoosier Park for the Dan Patch as his first start in North America. With 35 wins in 45 starts in New Zealand, Lazarus N accumulated more than $3.8 million in earnings before being acquired by his new connections in the United States. He was a winner twice of the prestigious New Zealand Cup, the Inter Dominion, the Hunter Cup and the Victoria Cup, just to name a few of his biggest wins in New Zealand.

Takter supplemented Lazarus N into the Dan Patch for a fee of $25,000. His new connections hope to turn him into a dual hemisphere stallion at the conclusion of his racing career.