The first session of the Indiana Sired Fair Circuit (ISFC) will come to a close Saturday, Aug. 7 with 17 races slated at the Jay County Fairgrounds in Portland. Two and three-year-old pacers and trotters will have one final shot at collecting points to try to get into the Governor’s Cup Championships set for the Indiana State Fair Thursday, Aug. 12. 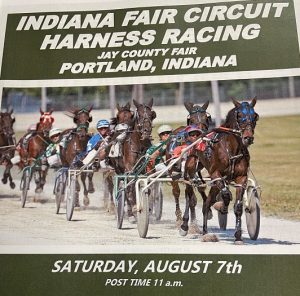 The Jay County Fairgrounds will host 17 races Saturday, Aug. 7 beginning at 11 a.m. to help solidify the finalists for the Governor’s Cup Championships at the Indiana State Fairgrounds Thursday, Aug. 12.

DP Realordeal from the Bill Webb barn will kick off the program in Race 1. The Real Desire two-year-old colt pacer by Real Desire has won four of eight starts and only missed the top three once in those outings. Doug Rideout will guide DP Realordeal from post four in the opener, which gets underway at 11 a.m.

Bankruptcy Bound and Terry Skinner will try for win number five this season in their eighth start in the freshman filly pacing division. They will start from post three in the third race. The Always A Virgin filly has a best time of 2:03.3 taken in her last start at Converse. She is currently on a two-race win streak for owners Robert and Richard Farina of Illinois.

Rockin Bambi will also seek a win for Skinner in the second division of freshman pacing fillies. The Rockin Image filly is seven for eight this year with a best time of 1:56.0 taken at Hawthorne in early July. She is owned by Ar’Tarrius Fleming of Mississippi and starts from post three in the fourth race.

Two-year-old colt and gelding action will be led by Rojo Man from the Doug Rideout barn. The Swan for all youngster has won four of nine starts this year, with no start back of third. His best time was taken in his last start at Goshen in 2:05.4 and he looks for his third straight win in the sixth race from post four. Alan White and Dave Gamble own Rojo Man, who was also bred by White.

Swan Fine Lady will seek her 12th win of 2021 in the second division of sophomore trotting fillies. The Swan for All Filly from the Mervin Schmucker barn is on a major win streak for Rocking Meadows Stable of Grabill, Ind. After going winless at two, Swan Fine Lady has earned a career best time of 1:59.4 and has in excess of $30,000 made this year. She starts from the second tier in post six in the 15th race of the day.

Following the Governor’s Cup Championships next week at the Indiana State Fair, a second round of ISFC races will run through October, giving those involved in the series the opportunity to earn points and gain more wins on the “second chance” phase of the series.