It was a gate to wire effort for Lady Angel in the $12,100 Classic Pace for fillies Monday, July 25 at the Elkhart County Fairgrounds. The sophomore daughter of JK Endofanera rallied home for the win in 1:58.1 with trainer-driver Tyler Miller at the controls. 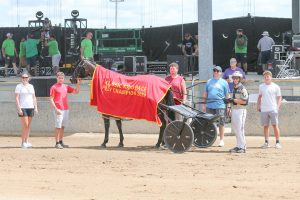 Lady Angel and Tyler Miller are greeted in the winner’s circle at the Elkhart County Fair following their win in the Classic Pace for pacing fillies Monday, July 25. Photo by Dean Gillette

Lady Angel rushed out to the lead at the start and established fractions of :29.1 and :59.1 before feeling any heat from the outer flow led by Pure Silky and Doug Rideout. Only in front by a half length at the three-quarters in 1:28.1, Miller asked the filly for more and she responded, rolling out to a three and three-quarter length advantage at the finish. Pure Silky finished second over JK Lady Star and Kevin Slabaugh for third.

It was the fourth win of the year for Lady Angel, a homebred for Miller. Her best time was taken both as a two and three-year-old of 1:54.4 at Harrah’s Hoosier Park. She is now six for 11 in her career with more than $27,000 in earnings.

Two swift divisions of the Classic Pace for three-year-old colts were also contested on the card with Luckbewithalex and trainer-driver Doug Rideout winning the quickest of the two. After being parked on the outside at the quarter in :28.0, Rideout rallied the three-year-old Luck Be Withyou to the front end and moved out to a comfortable margin at the half in :56.4 and three-quarters in 1:26.0 before the field began to close in on them. In the stretch, Lucks On Time and Michael Detweiler closed in quickly, but could not reach Luckbewithalex, who earned the mile in 1:55.4, a final quarter in :29.4. Lucks on Time was second over Always-a-laser and Mike Peterson for third.

The other division of Classic Pace colts and geldings was won by BB Lucky Boy from the Odell Cross barn. Guided by Jordan Ross, the Luck Be Withyou ridgeling led gate to wire in the win by three and one-quarter lengths in 1:56.1, a final quarter in :28.2. Odds on Alpha Male and Mike Peterson finished second over Frequent Image and Robert Taylor for third.

BB Lucky Boy is owned by Larry Poindexter of Tennessee. Martin Schmucker bred the sophomore, who earned his first win of 2022 after taking a two-year-old mark last year of 1:53.1 at Harrah’s Hoosier Park.