Two talented two-year-old fillies could not be separated at the finish line Thursday, July 7 at Harrah’s Hoosier Park. The pair finished in a dead heat with both earning a new lifetime mark of 1:55.0. 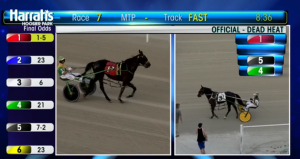 La Rockin Shania, Always in Flight, could not be separated at the finish to share the win in 1:55.0 Thursday, July 7 at Harrah’s Hoosier Park.

Tell Me Honey and James Yoder were the first to strike, leading the way past the quarter in :28.4 before La Rockin Shania and Trace Tetrick moved out and around to take over at the half in :58.2. Tetrick lightly tapped La Rockin Shania heading into the final turn and she took off, leading by open lengths at the three-quarters in 1:28.0 as Always in Flight and John DeLong were flushed out first over for the stretch drive.

At first, it appeared La Rockin Shania would go untouched but Always in Flight kicked in late, closing in and joining La Rockin Shania at the wire for the win. Emdoubleakay and Don Eash closed quickly on the outside to finish two and three-quarter lengths back in third.

It was the first career start for La Rockin Shania, who had two previous qualifiers, winning one of those in 1:55.0. She is a half sister to La Always Amartini, who is still racing with a mark of 1:51.2 and earnings of more than $345,000. She was a $9,000 yearling purchase from the Hoosier Classic Sale last fall.

Always in Flight was making her fourth career stat with two second place finishes at Converse on the Indiana Sired Fair Circuit. The filly was an $8,000 purchase from the Hoosier Classic Yearling Sale last fall.

In the very next race, Cosmic Luck and Trace Tetrick scored a win in the pacing colts and geldings race for freshman. The Luck Be Withyou gelding got away fourth before moving to the lead at the half in :58.4. From there, he took over and held his opponents off at the wire, winning by a head in 1:55.2. Dirty Image and Michael Oosting finished second over Attaboy Lloyd and Jared Seekman for third.

Cosmic Luck paid $8.20. He is trained by Luis “Tony” Quevedo for owner John Barnard. Oakwood Farm bred the colt, who was not purchased at a sale last fall and was a private transaction for his connections.