La Nancio and Jared Finn trotted home to victory Wednesday, July 8 in the $10,000 Indiana Sires Stakes eligible event for three-year-old filly trotters. The duo covered the one-mile event in a time of 1:58.0 for their first win of 2020. 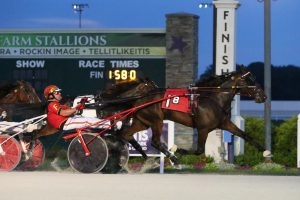 La Nancio and Jared Finn score a win in the first division of the Indiana Sires Stakes Eligible for three-year-old filly trotters. Photo by Dean Gillette

Finn utilized his inside post one to get out from behind the Todd Nixon starting gate with early speed, setting the first fraction in :28.3. The Guccio filly got a breather in the middle half of the race before picking the tempo back up and rolling home to a three-quarter length win over Encore Dreams K and Sam Widger. Longshot Fear This and Aaron Stutsman closed well for third.

La Nancio is owned by Samuel Daddono and Jenna Lubeck and trained by JD Finn. She now has more than $63,000 in career earnings and her best time remains at 1:57.2, taken last year at two.

Later in the card, another division of Indiana Sires Stakes eligible three-year-old fillies was held with Woodside Datendiva and Trace Tetrick earning the win in 1:54.4. The Guccio filly came from off the pace and trotted home in :26.3 to pick up the win by three-quarters of a length. Phabaj and Jared Finn finished second followed by Skyway Tinacious and Peter Wrenn for third.

Owned by Ervin Miller Stable Inc. and Robert McCormick, Woodside Datendiva is now two for four this season. The time of 1:54.4 was a new lifetime mark for the Erv Miller-trained filly. She currently has more than $83,000 in career earnings.