Kruisin Kristen and Jay Cross turned in the fastest freshman filly division at Frankfort Tuesday, June 28. The duo covered the one-mile event in the Indiana Sired Fair Circuit in 2:02.0. 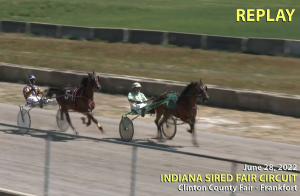 Starting from post four, Kruisin Kristen pursued the lead from the gate, parked on the outside of Velritedownmyalley and Bradley Ferguson through the quarter in :31.1. From that point, Kruisin Kristn was able to get the lead all to herself and was primed for a big half following the half in 1:01.3.

Kruisin Kristen is owned by Alvin Miller and also trained by the veteran trainer. Lavon Miller bred the Tellitlikeitis filly, who is now three for four in her young career on the ISFC. The mile at Frankfort was a new lifetime best.

Kruisin Kristen comes from a long line of winners, including the standout Indiana sired pacer Tellmeaboutit, who is also campaigned by Miller. Kruisin Kristen is the latest foal from Portia Blue Chip, who is now 10 for 12 in getting foals to the races.

Other two-year-old pacing filly winners on the day included Swartz Bros Elen and Mike Peterson in 2:03.1, Check in Process and Charlie Conrad in 2:03.4, and Here We Go BB and Doug Rideout in a time of 2:02.1.

Two year old colt and gelding pacers were featured in three divisions. M-M’s Tony and Jay Cross and Mercy Rock and Jordan Ross each won their respective divisions in 2:02.3. The other division was won by Lil Joe IV and Gerald Miller in 2:03.2.