Kobe’s Gigi and Peter Wrenn bested a field of talented filly and mare pacers Saturday, June 4 in the featured $22,000 Open Pace. The field of eight were all competitive until the end with the top six within four lengths of one another. 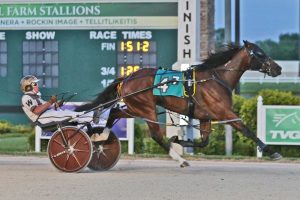 Starting from post four, Kobe’s Gigi got the garden seat behind early leader Somebodyslilly and Andy Shetler, who set the early fraction of :26.4 and :56.2 before feeling pressure from Kobe’s Gigi, who was flushed out heading to the three-quarters in 1:25.1.

In the stretch, Kobe’s Gigi paced home in :26.1 to score the win by one and one-half length over a quick closing Rockin Nola and Joey Putnam. Grace Rocks and Michael Oosting finished third. Every horse in the race paced home in :27.0 or faster.

Kobe’s Gigi was the favorite, paying $4.80 for the win. The four-year-old trained by Missy Essig is owned by Leander Schwartz and Black and White Stable. Harvey Fry bred the JK Endofanera mare from the first Indiana crop.

It was the first win of the year for Kobe’s Gigi, who had two previous second place finishes in three starts for 2022. She won seven races last year and only finished back of third three times in 18 starts, scoring her career best of 1:50.2 at Harrah’s Hoosier Park last fall. She now has more than $239,000 in career earnings for her connections.

Also on the Saturday card was the Open Trot with Dunbar Hall getting the nod. Driven by Sam Widger, the eight-year-old Deweycheatumnhowe gelding sat in mid pack before trotting home for the win in 1:52.4. Brookview Bolt and Trace Tetrick finished second over It’s A Herbie and Verlin Yoder for third.

Dunbar Hall is trained by Jeff Cullipher, who co-owns the trotter with Pollack Racing LLC. Walnut Hall Limited bred Dunbar Hall, who earned his first win of 2022. The veteran trotter has 30 career wins with earnings over the $500,000 mark. His career best time of 1:51.2 was taken last year as a seven-year-old at Harrah’s Hoosier Park.