The Larry King Stable has been strong all season long on the Indiana Sired Fair Circuit (ISFC). They kicked off racing at the Shelby County Fairgrounds Monday, July 19 with a bang, winning all three divisions of the two-year-old pacing fillies.

Velstraightdreamer and Kevin Lambright went to post in the first race of the day from the second tier in the first division of freshman pacing fillies. Ivanna Gomore and Tom Luther went for the lead from the outside of the first tier to lead the field through fractions of :30.2 and 1:02.0. Velstraightdreamer was out and moving forward at the half but sat patiently as Ivanna Gomore continued to lead the way through the three-quarter mile marker in 1:32.3. 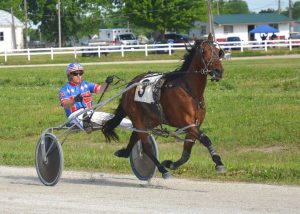 Vel What A Journey, shown earlier this year at Converse with driver Mike Peterson, scored her third win of the season at Shelbyville Monday, July 19. Photo by Indiana Standardbred Fair Circuit Facebook

Around the final turn, Velstraightdreamer moved up to take over and began to pull away from the field in the stretch. The Straight Shooting filly was a three and one-half length winner in 2:03.0, the fastest of the three divisions. Ivanna Gomore finished second in a photo with Latest Kiss and Matt Rheinheimer.

Velstraightdreamer is owned by King Racing Stable and Charlie K Racing Inc., who bred the filly. She is now seven for seven this season with her best time taken at Converse in 2:01.0.

Another winner on the card for King was Vel Ya Want To driven by Clay Craib. Also starting from the second tier, the Straight Shooting filly got away third and rode along as Zig Zag Zoom and Carson Conrad led the way through fractions of :31.2, 1:04.0 and 1:35.1. In the stretch, Vel Ya Want To moved in to challenge, grabbing the win by three-quarters of a length in 2:06.0 with a final quarter in :30.0. Reaganomics and Jay Cross finished second over Zig Zag Zoom.

King Racing Stable owns Vel Ya Want To. She was bred by Alvin Schwartz.

The final winner on the card was recorded in the third race to polish off the two-year-old pacing fillies. Vel What A Journey and Kevin Lambright got away in third as Vel Miss Swift and Clay Craib went to the lead to the quarter in :32.0 and half in 1:05.0. Vel What A Journey was out and moving at that point, going right on by at the three-quarters in 1:34.2.

Vel What A Journey continued to open up her advantage in the final quarter, eventually winning the race by 10 and one-half lengths. Rockstars Dynamite and Doug Rideout finished second over D Sparklin Virgin and Clifton Bell for third.

King Racing Stable owns Vel What A Journey. The Panther Hanover filly was bred by Alvin Schwartz. She now has three wins and three seconds in seven starts with only one try out of the top two. Her best time was taken at Converse in 2:00.0.

Action continues at the Shelby County Fairgrounds in Shelbyville on Tuesday. First post is set at 11 a.m. featuring two-year-old trotters and three-year-old pacers.