When racing began in Indiana in 2018, King Lil Joe was ready to go. The three-year-old colt, who is by He’s All That, won the preliminary round of the Jarrod Duncan Memorial on opening night at Hoosier Park with Andy Shetler in the bike and returned a week later to win the final. He’s never backed down. 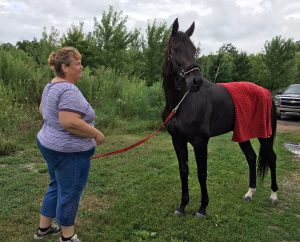 Always alert, King Lil Joe listens to the races at the Shelby County Fairgrounds as Lori Maynard cools the colt out after his race.

Owned by business owner Turrondus Smith of Canton, Miss., King Lil Joe has earned 10 wins in 20 starts this season for earnings in excess of $30,000. He also took a new lifetime mark at the Indiana State Fairgrounds in June in 1:54.3. He hasn’t missed hardly any county fair races with Jay Cross as his primary driver and leads all sophomore pacing colts and geldings in the most current ISFC standings with 370 points through July 22. Miss U Big Mike is in second place with 167 through the same date over Woodside Banjo (152) and Wallyintheshade (129).

“He definitely wants everyone to know he’s here,” said Lori Maynard, who has been associated with the horse for the past year. “He’s still a colt and he’s pretty loud and neighs a lot. But he’s an easy horse to take care of.”

Maynard has recently taken over training duties for King Lil Joe. Andy Anderson, who has been the primary trainer, recently returned home to Shelbyville. Maynard is now caring for the strapping colt.

“Andy deserves all the credit with his success this year,” added Maynard. 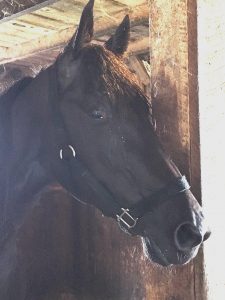 King Lil Joe is an impressive looking colt, owned by Turrondus Smith. He is always aware of his surroundings when he’s racing.