Fresh on the heels of Hoosier Champions, featuring the finals of Indiana Sires Stakes action, two trotting consolations were held Saturday, Oct. 16 for three-year-olds. King Felix and Sister Jean were both winners in their respective divisions and were both driven by Trace Tetrick, leading driver at Harrah’s Hoosier Park. 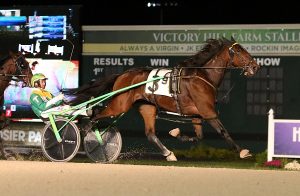 King Felix was the first to pick up the special race. The Pine Credit gelding began his season on the Indiana Sired Fair Circuit and advanced to Indiana Sires Stakes action for trainer Doug Rideout and owner Matthew Miller. King Felix and Tetrick were able to grab the top spot after the quarter in :27.3 and led the way to the wire in 1:55.0. All the Truth and Ricky Macomber Jr finished second over Northern Rocks and Peter Wrenn for third.

It was the fifth win of the season for King Felix and a new career best time. The gelding pushed his career bankroll over the $100,000 mark with the win, the ninth of his career. Merlin Miller and Dennis Bontrager bred the gelding.

In the sophomore trotting filly ranks, Sister Jean earned the title in the $25,000 consolation. The Swan for All filly had a similar trip, taking over the lead after the quarter in :27.3 and leading the way to the three-quarters before being overtaken by Justa Hintof Spice and LeWayne Miller. In the stretch, Sister Jean was able to come back and earn the win by one length in 1:56.2, a final panel in :29.3. Cindy the Treat and John DeLong finished second over Justa Hintof Spice for third.

Sister Jean earned her fourth win of the season. She now has in excess of $67,000 in career earnings for her connections. Her career best mark stands at 1:55.3 taken earlier this season at Harrah’s Hoosier Park.