Jack Killean filled in for driver Peter Wrenn on the Thursday, June 24 racing program and brought home a win for the stable. Trained by Melanie Wrenn, Hat Trick Marleau gave Killeen his first win in Indiana in the tenth race of the night. 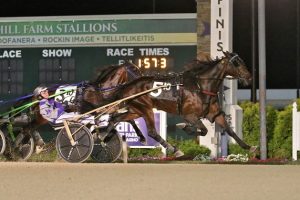 Starting from post four, Hat Trick Marleau and Killean rallied out early and secured the two-hole right behind Dr M and Michael Oosting. Fractions of :28.1, :58.2 and 1:29.0 were set before Hat Trick Marleau moved to the outside to challenge. The five-year-old trotter rallied home in :28.2 to give Killean his first Harrah’s Hoosier Park win in 1:57.3. Admiral Dewey driven by Trace Tetrick, finished one length back in second over Dr. M for third.

Hat Trick Marleau was a bit of a surprise for racing fans, paying $20.80 for the win. The Crazed gelding is owned by Marc Camirand, Nicole Gurtner and Claude Thibault, all of Quebec. It was the first win of the season in 12 starts for Hat Trick Marleau, who now has 10 career wins in 58 starts. His career best time of 1:57.0 was taken last year at Rideau Carlton Raceway.

It was the 12th career win for Killean, who hails from Washington, Pa. The 20-year-old driver started driving in 2018. He has been driving at Harrah’s Hoosier Park this season, and drove at Pompano Park this past winter. It was the only drive of the night for Killean. He drove Hat Trick Marleau in his last start as well.