Kid Tyler and Peter Wrenn snuck up the inside and scored the win in the $25,000 Indiana Sires Mini Series Final Wed. June 29 at Harrah’s Hoosier Park. The longshot surprised the field, paying $99.00 for the win. 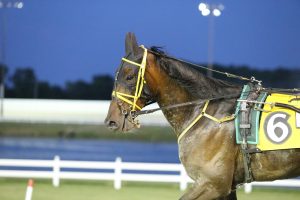 Kid Tyler and Peter Wrenn patiently moved up the inside in the stretch to win the Mini Series Final Wed. June 29 at Harrah’s Hoosier Park. Photo by Dean Gillette

Wrenn rallied Kid Tyler out from the gate with some early speed and secured the third spot along the rail as DJ Dan and Jimmy Whittemore set the first fraction of :27.3 and the half in :57.1. A second tier of traffic began to form led by Tug and Coop and Trace Tetrick, but Wrenn opted to keep Kid Tyler on the inside and follow along until the stretch.

Heading down the lane, horses fanned out across the track and allowed Kid Tyler to move up into second on the inside. When the passing lane arrived, he was able to get a little more racing room and went by DJ Dan and put a nose in front at the wire to defeat Tug and Coop for the title in 1:54.2. DJ Dan held strong for third.

Kid Tyler is trained by Tom “T” Tetrick and owned by his parents, Mary and Tom D. Tetrick, who bred the four-year-old gelding by Pinetucky. It was the second start of the year for Kid Tyler, who earned only his second lifetime win. The victory also marked a new lifetime best.

Later in the card, the three-year-old colt and gelding trotters went to battle in the $94,500 Indiana Sires Stakes. Race favorite Ponda Adventure, driven by Trace Tetrick, turned in an impressive mile for the win in 1:52.4. Bluebird Bishop and Sam Widger set fractions of :26.1, :55.0 and 1:24.3, which set Ponda Adventure up perfect for the stretch drive from the two hole.

Ponda Adventure trotted home in :27.4 for the win by two and one-quarter lengths. Yo Mister and Verlin Yoder held steady for second over Adamsville Road and Michael Oosting, who closed well for third.

Ponda Adventure is trained by Erv Miller for Engel Stable of IL, Louis Willinger and Jerry Graham. Pond-A-Acres bred the Swan for All gelding, who is undefeated in three starts this season. Overall, he is 11 for 13 with more than $367,000 in earnings. The mile marked a new career best for Ponda Adventure.