Kickin Up My Heels and Trace Tetrick closed out the Thursday, June 25 racing program at Harrah’s Hoosier Park with an exciting finish in the $20,000 Rick Dalton Final. The duo rallied late in the race to bring home the top prize in a time of 1:52.1. 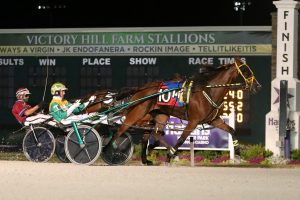 Kickin Up My Heels and Trace Tetrick got the edge at the wire in the Rick Dalton Final at Harrah’s Hoosier Park Thursday, June 25. Photo by Dean Gillette

Starting from the second tier, Kickin Up My Heels got away in mid pack as Western Sierra and Brandon Bates were followed to the lead by Genie Rockwell and Marlin Fry. Genie Rockwell obtained the top spot after the first quarter in :26.0 and was able to get a breather in the middle of the race.

In the stretch, Kickin Up My Heels began to creep up on the outside and in the stretch, found another gear, getting by Genie Rockwell in the final stride to win by three-quarters of a length, posting a final panel in :27.3. Comaneci and Peter Wrenn finished third.

Also, on the Thursday program was the $20,000 Final of the Cliff Booth for Indiana sired trotters. Swan in Motion, the heavy favorite, moved down the backstretch and took over at the half and trotted home to a comfortable two-length win with Ricky Macomber in the bike. The time of the mile was 1:53.2. Dude Included and John DeLong finished second while Givemeacookie and Trace Tetrick finished third.

Swan in Motion is owned by M & M Racing and Norbert Maza and trained by Jamie Macomber. The Swan for All sophomore is now two for two in 2020 and is almost to the $200,000 earnings mark.

Odds on Madison also picked up a win in the $18,000 Miss Windfall Final for driver Peter Wrenn and Trainer Melanie Wrenn. The three-year-old Tellitlikeitis filly scored the win by a neck in 1:52.3 over Alwaysatyourplace and John DeLong. Rockinlikeastar and Trace Tetrick finished third.

Odds on Madison, owned by Odds on Racing, is two for two in 2020. Her latest win was a new career best.