Katkin American has only made one miscue all season long and he was on his game Thursday, Aug. 30 for the $85,000 final of the Indiana Sires Stakes for three-year-old trotting colts and geldings. The son of Guccio, driven by James Yoder, scored a new lifetime mark of 1:52.1 in his winning effort. 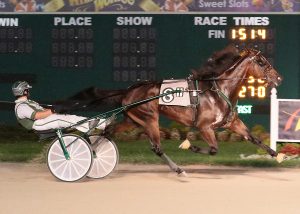 Katkin American had a tall task heading into the race as his fiercest opponent was last year’s Breeders Crown trotting champ Fiftydallarbill, who was driven from post three by driver Trace Tetrick. Yoder knew he would have a tough assignment starting from post eight but used early speed to get into the early flow as J S Peyton and Alex Udell set the first fraction in :27.0 followed closely by Fiftydallarbill.

Yoder kept Katkin American focused on reaching the lead and did so after the half in :55.2 before getting a bit of a breather around the final turn. In the stretch, the trotting gelding kicked it back up a notch to trot home in :27.1 to win by three and three-quarter lengths over Fiftydallarbill. Got The Groove and John DeLong rallied late in the stretch for third.

“He tries every time, and that’s probably what sets him apart,” said driver James Yoder through a Hoosier Park press release. “He felt really strong there in the stretch.”