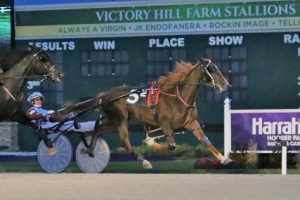 Justdoitforus and Sam Widger were winners in the $25,000 Consolation for three-year-old trotting colts and geldings Sat. Oct. 17. It was a maiden-breaking win for the flashy Guccio gelding. Photo by Dean Gillette

Justdoitforus, a son of Guccio, was paired up with Sam Widger and got away in the two-hole from the center of the track to follow Swan Legacy through fractions of :28.3, :57.0 and 1:26.0. In the stretch, Widger got the gelding out to challenge and did so with a final panel in :29.4 to take home the top prize in the $25,000 consolation. Mr. Wisconsin and John DeLong finished second, a neck behind Justdoitforus while Swan Legacy was another neck back in third with driver Trace Tetrick at the controls. The time for the mile was 1:56.1.

Owned by the 84-year-old Wyman, who is a minister in northern Indiana near Nappanee, Justdoitforus raced last year mainly on the Indiana Sired Fair Circuit and began his three-year-old campaign on the ISFC before shifting to Harrah’s Hoosier Park, finishing third in the start before the Consolation. The win pushed the earnings up over the $20,000 mark for Justdoitforus, who was purchased out of the Michiana Classic Yearling Sale from the Black Creek Farm consignment for $4,500.

Later on the Saturday card, Bluebird Keepsake and Peter Wrenn picked up the win in the $25,000 Consolation for three-year-old trotting fillies. The Swan for All filly went straight to the lead and never looked back, scoring the gate to wire win in 1:57.0. Givemeonemoretry and Jordan Ross finished second over Bluebird Ladyluck and Dan Shetler for third.

Bluebird Keepsake, bred by Daryl Miller’s Blue Bird Meadows, is owned by David McDuffee and L & L Devisser. Bluebird Keepsake was the highest priced yearling from the Hoosier Classic Yearling Sale in 2018, selling for $125,000. She was the first foal from Changed it All, who is a daughter of the superstar mare Armbro Keepsake who earned more than $880,000 during her career along with being named the O’Brien Two and Three-Year-Old of the Year as well as the Dan Patch Older Trotting Mare of the Year in 1994.