Just for Us, the standout two-year-old trotting filly owned and trained by Bonnie Mattingly, has returned for her sophomore season as strong as ever. The Guccio filly won her division of the Indiana Sired Fair Circuit (ISFC) Tuesday, July 14 at the Clinton County Fairgrounds in Frankfort, Ind. by three and one-quarter lengths in 2:02.4. 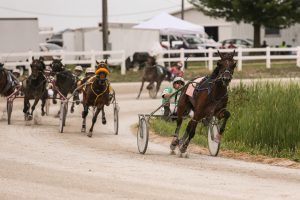 Just for Us, shown last year at Converse, was an easy winner in the sophomore trotting filly ranks Tuesday, July 14 for owner-trainer Bonnie Mattingly. Photo by Dean Gillette

Starting from the second tier, Just for Us and driver Charlie Conrad had to wait for the dust to clear before they could make a play for the front end. Just after the quarter in :31.2, Just for Us secured the top spot from Slick N Sassy and Joe Putnam and never slowed down for the win. Slick N Sassy finished second by an easy margin over Classic Money and Clint Coy for third.

Just for Us is now two for three this season on the ISFC this year. In all, she has 10 wins in 19 career starts and earnings in excess of $27,000. Her best time was recorded in a qualifier earlier this year at Harrah’s Hoosier Park in 2:00.4.

The other division of sophomore trotting fillies was won by Bubbles N Suds, driven by Joe Putnam. The Guccio filly, owned by Kristi O’Mara and trained by Dan O’Mara, was a gate to wire winner in 2:05.1, a half length ahead of Fear the Yankee and Matt Rheinheimer. Miss Eldorado and Alvin Miller finished third.

The fastest mile of the day was in the second division of two-year-old colt and gelding pacers. Big Gulp, trained and driven by Jay Cross, came from off the pace and moved three wide at the three-quarter mile marker in route to the win by three and one-half lengths in a time of 1:59.2, a final panel in :27.4. Northern Network and Jordan Ross finished second followed by Lil Joe III and Anthony Gray for third.

It was the second win for Big Gulp, who is a home bred by breeder Ben Yoder. The Always a Virgin gelding is now owned by Michael, Anna, McKenzie and Ben Yoder. The freshman is now two for two in his career and his time of 1:59.2 is a new career best mark.