Jusmakinyalook was the leader at the first pole and the leader at the last in the $47,500 Indiana Sires Stakes fourth leg Wednesday, July 20. The two-year-old Pinetucky filly trotter her mile in 1:53.4 for the win with Jordan Ross in the bike. It was her first win of the year in Sires Stakes action for trainer Robert Taylor. 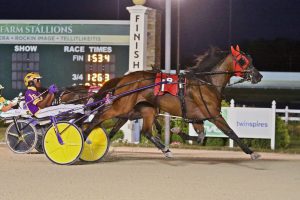 Jusmakinyalook and Jordan Ross scored their first win in Indiana SIres Stakes action this year and recorded a new lifetime mark in the process. Photo by Dean Gillette

Starting from the inside post, Jusmakinyalook rallied out early and had the lead at the quarter in :28.0 but was joined by Call Me Dani and Trace Tetrick on the outside. Call Me Dani moved on to the lead through middle fractions of :57.2 and 1:26.3.

In the stretch, Jusmakinyalook was back out to challenge and trotted home in :27.0 to score the win by a length over Call Me Dani. Swan Trixie and Peter Wrenn finished third.

Jusmakinyalook paid $5.20 for the win.  The sophomore filly is owned by Devon Miller and was bred by John Stoll. It was her third win in nine starts this season. She finished second in the third leg of Sires Stakes action in her last start before her win. The time of 1:53.4 was a new lifetime mark for Jusmakinyalook, who now has five career wins and more than $150,000 in earnings. She was not sold at auction as a yearling. There are 24 foals by Pinetucky that are three-year-olds this season. Pinetucky moved to Illinois last year. His richest foal is Pine Dream, who has nearly a half-million in earnings followed by the standout open trotter Sweet Mr Pinetucky and Jolenes Pinehonker. Jusmakinyalook is now among the top five all time quickest foals by Pinetucky.

Earlier in the night, Ross guided Babe’s Shooter to victory in conditioned claiming action. The Straight Shooting four-year-old gelding was a winner in 1:53.3. He is a full brother to the two-year-old filly standout Babe’s Darla, who Ross guided to victory the day before on the Indiana Sired Fair Circuit at the Shelby County Fairgrounds. Hartley Farms Inc. own both horses and both are trained by Carl Newland.

The other division of Indiana Sires Stakes was won by M-Ms Dream and Sam Widger. The favorite of the division, the sophomore trotting filly by Swan for All led gate to wire for the win in 1:53.1, trotting home in :26.3. Luv Lorelei and Robert Taylor finished second over Bluebird Dove and Peter Wrenn for third.

M-M’s Dream is trained by Henry Graber Jr. She is owned by Eleven Star Stables, Frank Baldachino and Hillside Stables. She was last year’s champion freshman trotting filly, winning six of eight starts. She is a perfect four for four this season and her mile Wednesday was a new lifetime mark. She now has more than $384,000 in career earnings.