And then there was one. In the past week, tracks continue to cease racing programs, including some of the last being Miami Valley, The Meadows, Northfield, Pompano and Hawthorne. Saratoga announced last week that Sunday, March 22 would be their final program. Cal Expo remains as the only one still in competition. On the final card at Saratoga, an Indiana sired trotter shined with a win as JS Peyton scored a commanding victory in the afternoon’s ninth race. 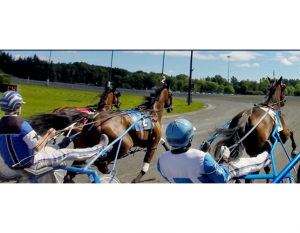 Driven by trainer Jordan Derue, JS Peyton started from the outside in post seven and had intentions of being on the front by the quarter. That task happened, leaving him three-wide at the quarter mile marker in :28.1. He secured the lead soon after and continued to lead the way through middle fractions of :58.2 and 1:28.2, slowing the tempo down dramatically. In the stretch, JS Peyton picked it back up and rolled under the wire by two lengths in 1:58.0.

Owned by FBP Racing Stable LLC and Derue, JS Peyton, a son of Swan for All, paid $7.00 to win. The five-year-old gelding earned his first win of the year in his fourth start of 2020. He was purchased from the Michiana Mixed Sale following his three-year-old season and has since equaled his mark of 1:55.4 at Saratoga. He has 17 career wins in 78 starts and with his most recent win, moved over the $100,000 mark.

As a two and three-year-old, JS Peyton was campaigned from the Jack Myers Racing Stable and driver Alex Udell. Before leaving his original connections, he earned a mark of 1:55.4 at Harrah’s Hoosier Park and won eight races for more than $43,000 in earnings for his Indiana connections.