Jones Z Tam and Jordan Ross earned a gate to wire win Saturday, Aug. 6 at the Jay County Fairgrounds in Portland. The duo covered the one-mile distance in 2:03.0. 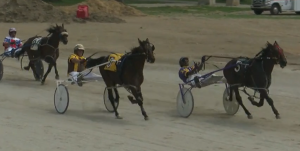 Jones Z Tam and Jordan Ross fend off Little Fighter and Doug Rideout to take a division of freshman pacing colts and geldings Saturday, Aug. 6 at the Jay County Fairgrounds.

Starting from post four, Ross rallied Jones Z Tam out of the gate with authority, getting the top spot by open lengths. The Beckhams Z Tam gelding then set fractions of :31.2, 1:03.0 and 1:33.3 before feeling pressure from the outside as Little Fighter and Doug Rideout moved up. Jones Z Tam fought for his top spot down the stretch and paced home in :29.2 for the win by three-quarters of a length over Little Fighter. Chucksfourtybucs and Chad Clark finished third.

Jones Z Tam is owned and trained by Mackenzie McDonald of Mississippi. Z Tam Stables LLC and Indy Lane Stables trains the freshman, who now has three wins in eight starts this year. His career best time was taken at Converse in his very first start in 1:59.0. Jones Z Tam has two wins on the ISFC but only has three starts with seven required to advance into the consolation bracket of the Governor’s Cup Championship, where he is ranked 15th on the list of two-year-old colt and gelding pacers.

Lil Joe IV and Gerald Miller picked up an impressive win with a big finish in another division of freshman pacing colts and geldings. The Luck Be Withyou colt, owned by Turrondus Smith, got away third as Attaboy Lloyd set fractions of :30.2 and 1:03.2. Heading to the three-quarters, Lil Joe IV moved up to challenge and was on the lead at the three-quarters in 1:34.1 before getting the edge. In the stretch, Attaboy Lloyd was not going to give in and fought his way back to the lead, but Lil Joe IV was the winner by a nose in 2:04.0. Attaboy Lloyd finished second over Checks On the Beach and Jeff Dever for third.

Lil Joe Iv is trained by Terry Haimes. He was bred by Karl Slabach. Lil Joe IV leads the standings by more than 75 points for two-year-old colt and gelding pacers. He has 372 points, starting 12 times on the ISFC with 5 wins. M-M’s Tony and Starlit Rockstar are tied for second on the list with 294 points apiece. Starlit Rockstar was also a winner on the day at Portland, scoring his mile in 2:00.1 with Mike Peterson in the bike.