Seven seasoned Standardbreds are set to take the track at Harrah’s Hoosier Park Friday, May 13 for the $25,000 John Dutton Series final. The event is slated as the 10th race on the card with an estimated post of 9:24PM. 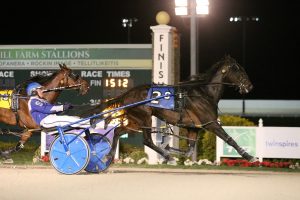 Rock N Republic and Andy Shetler were winners in the first round of the John Dutton Series and are one of the favorites for the final at Harrah’s Hoosier Park. Photo by Dean Gillette

The field is fairly even on the morning line odds but Caption This from the LeWayne Miller gets the slight edge from post four at odds of 3-1. The four-year-old JK Endofanera gelding is three for five this season and holds a 1:51.0 mark taken last year as a three-year-old. Unraced at two, Caption This heads into the Dutton Final with $75,000 on his card for owners LeWayne Miller, James Hays and Nathan Yoder.

Joining Caption This as a favorite in the Dutton final is Rock N Republic from post one for Andy Shetler, who drives and trainers. The Pet Rock four-year-old took his career best time in last week’s preliminary round in 1:51.2 and seems to be peaking at the right time for the final. Owned by Dossie Minor, Rock N Republic has 11 career wins, including four of six last year mainly on the Ohio circuit. He begins the race at odds of 7-2.

The third favorite of the field is Saddle Up from the Walter Haynes Jr. barn. The JK Endofanera gelding has been close in all of his starts this season, finishing third in six starts with one win. He has a mark of 1:50.1 taken last year and will be guided by Brandon Bates from post five at odds of 4-1 for Jeff Fought Racing of Columbus, Ohio.