Joey Putnam, one of the state’s newest drivers, scored a double on the Tuesday, April 30 racing program at Harrah’s Hoosier Park. Putnam, who is beginning his third year as a driver, earned back to back wins in the eighth and ninth races. 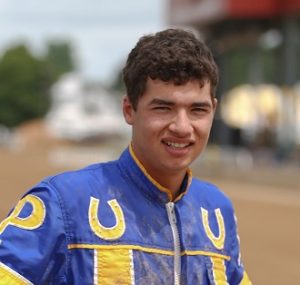 A graduate of Pendleton Heights High School, Joey scored both wins behind horses trained by his father Joe. The first winner, Bettor’s Outlaw, moved to the front down the backstretch and never looked back, winning by four and one-quarter lengths in a time of 1:52.3. It was the second straight win for Joey and Bettor’s Outlaw, a five-year-old son of Bettor’s Delight.

The second win was a bit of a surprise. Joey had Golden Wheel near the back of the pack early on and caught cover in the outer flow. At the top of the stretch, the duo had to catch the favorite, Whoseafterwho and Michael Oosting, and accomplished their goal, winning by one and one-half lengths in a time of 1:58.3, a new lifetime mark. The win was the second in three starts for the three-year-old Guccio trotter, who paid $20.00 to win to his loyal backers.

Both Bettor’s Outlaw and Golden Wheel are co-owned by Joe and John Stephenson. The double win for Joey was his fifth and sixth of the meet, which now ranks him among the top 12 drivers at the track. The 21-year-old reinsman now has 55 career wins.