Joe Putnam, a native of Michigan and longtime Indiana horseman, was inducted into the Michigan Harness Racing Hall of Fame at Crystal Gardens Banquet Center in Howell, Mich. Putnam was joined by James Jackson as inductees from 2020. 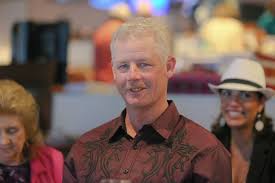 Joe Putnam, ISA Board President, was recently inducted into the Michigan Harness Racing Hall of Fame. Photo by Dean Gillette

Putnam first ventured to Indiana during the 1995 season on a ship-in basis. He brought a stable to the Hoosier State at Hoosier Park in 1996 and has been a full-time horseman in Indiana ever since. He’s especially known for his work with trotters, campaigning such greats as ABC Mercedes and ABC Bay Bee and in later years, Rockin Nola, who is one of the top older pacing mares in Indiana right now.

In addition to overseeing his stable, Putnam also serves on the Indiana Standardbred Association (ISA) board. He is in his second year as President of the organizations and donates numerous hours to Indiana harness racing. Putnam has been vital is providing the link between the horsemen’s organization and track management.

Putnam and his wife, Lisa, reside in Pendleton, Ind. and own a training center just north of Markleville, Ind. Their son, Joey, also assists with the stable and is among the top five drivers this season at Harrah’s Hoosier Park.