Joe Joe Joe and Jesse Yoder turned in a big performance Saturday, March 27 at Harrah’s Hoosier Park, winning a division of the Donnie Conrad Memorial late closing series. The duo scored a gate to wire win in 1:54.4, which was a new world record for a double gaited Standardbred in harness racing history. 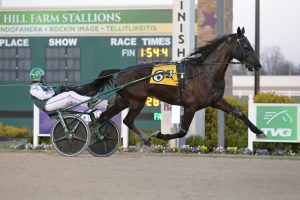 Joe Joe Joe and Jesse Yoder established a new world record for a double gaited Standardbred Sat. March 27 at Harrah’s Hoosier Park with a win on the trot in 1:54.4. Photo by Dean Gillette

Starting from post six, Jesse Yoder had Joe Joe Joe on the lead before the field of 10 hit the first turn. They passed the quarter in :28.1 and continued to open up lengths on the field at the half in :57.1 and the three-quarters in 1:26.0. From there, Joe Joe Joe had a big hold on the field and opened up to a 10 and three-quarter length advantage for the win. Major Hooligan and Don Eash finished second over Broknheartsville and Trace Tetrick for third.

The favorite of the field, Joe Joe Joe paid $3.60 for the win. The seven-year-old Roll with Joe gelding is owned by Yoder and was bred by Pine Vue Stables LLC. What makes him unique is he had a successful career on the pace until Yoder decided to switch him to the trot.

Joe Joe Joe made his last start on the pace Oct. 14 last fall at Harrah’s Hoosier Park. He has 16 career wins in 95 career starts with a win mark of 1:50.2. Yoder switched him to the trot this winter in Florida, winning his last start at Pompano Park. Increasing his speed to 1:55.0 would have set the world record for times for a double gaited horse. Joe Joe Joe eclipsed that with the 1:54.4 win, pending official verification from the U.S. Trotting Association on the world record status. The gelding is now two for four on the trot with $7,000 on his bankroll.