JK’s Pilot and driver Russell Foster scored an impressive win at Rosecroft Raceway Sunday, April 24. The duo completed the mile in the $7,000 conditioned event in 1:53.2. 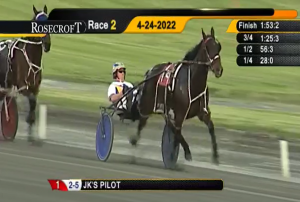 JK’s Pilot and Russell Foster were comfortable winners at Rosecroft Raceway Sunday, April 24 to take a new career mark of 1:53.2.

Starting from post one, JK’s Pilot had some early speed but was out kicked to the lead early by Walking with Elias and Eric Davis and Royal Chief and Roger Plante Jr. at the start. But as soon as they were settled, JK’s Pilot was out and rolling heading into the first turn on the five-eighths mile track. He easily took over the top spot and was in full control by the half in :56.3. From there, he was strong, rolling through the three-quarters in 1:25.3.

Although several horses attempted to close the gap, JK’s Pilot was well in hand during the stretch drive. Foster never took his hands out of the handholds as the pacer completed the final quarter in :27.4 for the win. Walts Natty Datty and Bryson Dunning finished second over Walking with Elias.

JK’s Pilot was the race favorite, paying $2.80 for the win. The JK Endofanera four-year-old gelding is owned by William Wood, William Dittmar Jr. and Ricky Swann. Eric Ell trains the gelding, who was bred by Robert Yoder and John Miller.

It was the first win of 2022 for JK’s Pilot in his 15th start of the year. The mile was a new lifetime mark for the gelding, who now has four wins in 51 starts. He was lightly raced at two for the Jamie Macomber Stable and competed in the Indiana Sires Stakes and Fox Stake, pacing several miles under the 1:53 time barrier before changing hands last fall to Ell, who raced him at Harrah’s Philadelphia and Dover Downs all winter before relocating to Rosecroft Raceway.

JK’s Pilot is the first foal from the mare Banderosa, who is by The Panderosa. He has a half brother named Awesome Rock that is a two-year-old this season and a yearling half sister Bluebird Sweethart, who will be in the sales this fall.

JK’s pilot was one of 69 foals sold at auction from the first crop of JK Endofanera. He was sold under the name JKNR Yes Express before getting a name change from his connections, who purchased him for  $7,000 from the Hoosier Classic Yearling Sale.