JK My Girl and Joey Putnam came roaring down the stretch to upset in the first leg of Indiana Sires Stakes (ISS) action Thursday, July 15 at Harrah’s Hoosier Park. The race was one of three divisions for two-year-old pacing fillies held with a purse of $46,500. 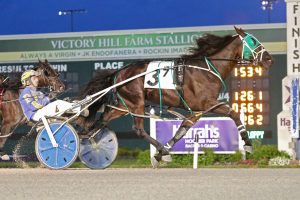 There was a lot of action when the gate folded in the first division of the ISS. Always Gonna B You and Sam Widger left for the lead and they were joined by Marvelous Marshia and John DeLong as they passed by the quarter in :26.2. As soon as Marvelous Marshia got settled on the inside, Rockin Diamonds and Robert Taylor moved to the lead at the half in :56.4. They were followed closely by Goo Goo Won and LeWayne Miller, who had a brief lead at the three-quarter mile marker in 1:26.1.

In the stretch, JK My Girl had followed cover on the outside and took advantage of good positioning to pace home in :27.1 and earn the win in 1:53.4. Goo Goo Won finished one and three-quarter lengths back in second followed by Marvelous Marshia for third.

JK My Girl paid $25.60 for the win. The JK Endofanera filly is trained by Mike Arnold and owned by Tony Huffman of Minnesota. 3 Brothers Stables of New York bred JK My Girl, who is now two for three in her career. The mile also marked a new career best time for her, which equaled Alloutblitz in the second division as the fastest of the night.

Alloutblitz was favored to win her division of ISS action and didn’t disappoint. Also by JK Endofanera, the filly got away in the two hole behind Cat’s Image and Ricky Macomber Jr. who set fractions of :27.2, :56.4 and 1:25.4.

Alloutblitz then tipped out and turned in a final quarter in :27.3 to win by three-quarters of a length, fending off late closer She’sahotmuffler and Atle Bender, who finished second. Cats Image dug in for third.

Alloutblitz is trained by Jeff Cullipher and owned in partnership by Cullipher and Pollack Racing Stable. She also stopped the timer in 1:53.4, a new lifetime best. She is now two for two in her brief career and was bred by Duane Miller and was an $80,000 yearling purchase last fall at the Hoosier Classic Yearling Sale.

Cullipher also scored the win in the final division of ISS action. Dancin Image, also owned by Pollack Racing and Cullipher, earned a near gate to wire victory by one-half length in 1:54.1. Trick of the Light and Michael Oosting turned in a tremendous late rally to close for second over Lorraine Smoke and James Yoder for third.

A daughter of Rockin Image, Dancin Image paid $8.00 for the win. She is now two for two and was bred by Roman Miller of Topeka, Ind.