A new crop of stars is emerging at Harrah’s Hoosier Park this season and many of them have the same breeding. Primary Colors, driven by Trace Tetrick, and Midnight Rebel, driven by Brandon Bates hit the wire together in Mini Series action Wednesday, May 26 with Primary Colors getting the edge by a nose. 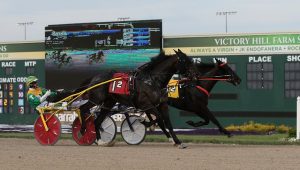 Primary Colors (outside) and Midnight Rebel (inside) hit the wire together in mini series action Wednesday, May 26 at Harrah’s Hoosier Park. Photo by Dean Gillette

Primary Colors left the starting gate well but Midnight Rebel had a plan from the start to get to the lead, providing the tempo by two lengths at the first quarter in :26.2. Primary Colors sat right at his back as the pace slowed down to the half in :55.2 before picking up to the three-quarters in 1:24.0. Primary Colors and Midnight Rebel, a free-legged pacer trained by Mark P’Pool, battled side by side all the way down the lane with Primary Colors getting the win on the outside in 1:51.4. Jet Ace and Don Eash finished third, pacing home in :26.3 to move up and get on the board.

Trained by Kelly O’Donnell, Primary Colors was the favorite, paying $4.20 for the win. The son of JK Endofanera, who is also the sire of Midnight Rebel, is owned and bred by Emerald Highlands Farm of Ohio. He is the son of Color’s A Virgin, Breeders Crown winner, Dan Patch Three-Year-Old Pacing Filly of the Year in 2014 and winner of more than $1 million during her career.

Unraced at two, Primary Colors earned his first career trip to the winner’s circle in the win, his third start of his career. He is the second of three foals out of Color’s A Virgin, whose first foal, Somecolorsomewhere took a mark of 1:55.2 last year. The third foal, Color’s A Dragon, is the first filly and is a two-year-old this season.

The very next race was also won by a son of JK Endofanera. Guided by Sam Widger, Midnight Mood rallied from the back of the pack to close in late for the win in 1:52.3. It was his first start of the season and a new career best time for the sophomore pacing colt. He is trained by Tyler George and owned by Bartley Traditions Racing.  La Tomcat and Don Eash finished second over Light Up the Park and Michael Oosting for third.