JJ Endofanera made her racing debut a winning effort Wednesday, June 30 at Harrah’s Hoosier Park. The freshman pacer brought home the win in 1:55.3 with driver Trace Tetrick at the controls. 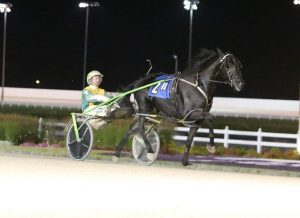 Starting from post two as the favorite of the field, JJ Endofanera got away third as Miss Major Hunt and LeWayne Miller established the early pace of :27.4 and :58.1. Heading into the final turn, Tetrick moved the JK Endofanera filly out and proceeded to close in on the leaders and take control in the stretch.

JJ Endofanera led throughout the stretch as She Means Business and Michael Oosting came rolling home with a big stride late in the race. But JJ Endofanera was able to hold on for the win by a neck over She Means Business. Cats Image and Ricky Macomber recovered after a break before the start to move in for third.

JJ Endofanera is a first foal of JK You’re So Vain. She was a $35,000 purchase last fall at the Standardbred Horse Sale by her current connections.

Earlier in the evening, Breckenridge scored a gate to wire win in three-year-old trotting action that included both colts and geldings and fillies. The Class Included gelding, driven and trained by Dan Shetler, was a winner in 1:55.0, paying $11.60 for the win. Dewtiful’s Grace and LeWayne Miller finished one length back in second followed by Guccio’s Lady and Michael Oosting for third.

Breckenridge is owned by Shetler and Dojea Stables. Sawgrass Farms and Shetler bred the Indiana sired sophomore, who earned his first win of 2021. Breckenridge was a winner in five of nine starts at two. He took a new career best time in qualifying action earlier this year in 1:53.3.