Jet Ace, the three-year-old Indiana sired gelding, proved he’s ready to kick off his sophomore season with a win in qualifying action Wednesday, March 17 at Harrah’s Hoosier Park. He scored a new career best time with his win in 1:56.1. 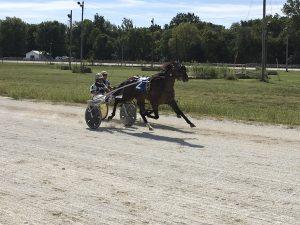 Owned, trained and driven by Don Eash, Jet Ace rolled out from the inside post one for the lead at the quarter in :28.4 but was quickly passed up by How About Murph and Joey Putnam, who sat middle fractions of :58.2 and 1:27.2. In the stretch, Jet Ace was out to challenge and was able to pace home in :28.3 for the half-length win over How About Murph at the wire. Stonehouse Adam and Sam Widger finished third.

Jet Ace spent the majority of his two-year-old campaign on the Indiana Sired Fair Circuit (ISFC) last summer. The Jereme’s Jet gelding, bred by Paul and Cathy Webb of Goshen, finished among the top three in 10 of 15 starts for the year with a tally of nearly $18,000 in earnings. Jet Ace was purchased by Eash at the Michiana Yearling Sale for $10,000 and was the highest priced yearling that year by Jereme’s Jet out of only six that sold at public auction.

Jereme’s Jet is now standing his eighth season in Indiana. He stood in Ontario five years prior to arriving in Indiana. He is out of the tough race mare Ohyouprettything, who raced at Hoosier Park as a two and three-year-old under the direction of trainer Joe Anderson. The Sportsmaster mare was named 1998 Illinois Horse of the Year. She completed her career with starts in the Breeders Crown and a mark of 1:50.4 and earned in excess of $1.2 million. Jereme’s Jet is her most successful offspring.  Jereme’s Jet stands at Schwartz Boarding Farm in Berne, Ind. and the stud fee is negotiable.