The two-year-old trotting colt and gelding ranks have been competitive all season long and that spirit carried over to the $20,000 final at the Indiana State Fairgrounds Thursday, Sept. 10. Jessies Outlawed and Doug Rideout were able to slip a nose in front of J-S Hopscotch and Alex Udell at the finish for the win and take home the inaugural Governor’s Cup Championship trophy. 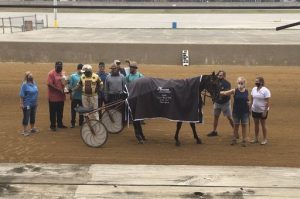 Jessies Outlawed completed a successful ISFC season with a win in the Governor’s Cup Championship for two-year-old trotting colts and geldings. He earned a blanket and a replica of the newly designed Governor’s Cup trophy, presented to each of the winners for the championships. Photo by Indiana Standardbred Breed Development

Jessies Outlawed came into the race with five wins and J-S Hopscotch had six wins. Both two-year-olds had been tough all season long, so the showdown between the two was as expected, a great finish.

J-S Hopscotch and Udell used a quick move from the outside to gain the early advantage and lead the way through fractions of :30.0, :59.2, and 1:28.2 for the evenly rated mile. Jessies Outlawed sat right on his back the entire way and when it came time for the stretch drive, Rideout tipped the Jailhouse Jesse gelding to the outside. It took the entire length of the stretch to overcome J-S Hopscotch, a son of Mr Web Page, but the final stride accomplished his goal, picking up the win in 1:59.3. J-S Swan Returns, driven by Dan Shetler for the Udell-Jack Myers Stable, finished three lengths back in third.

Owned by Julie Rideout and Glider Stables, Jessies Outlawed increased his bankroll to more than $23,000 with the win, his sixth in 12 starts this season. He also lowered his career best time, which was previously set at 2:02.2 taken at the Indiana State Fairgrounds in August. The Harvey and Alvin Fry-bred trotter was an $18,000 yearling purchase from the Hoosier Classic Yearling Sale, selling under the name of Jesmach Outlaw. He was the first Hip Number in the sale.

Another strong contender all season long on the Indiana Sired Fair Circuit (ISFC) has been Big Gulp, the undefeated two-year-old pacing gelding from the Jay Cross barn. Big Gulp was a big winner during the first round of racing at the Indiana State Fairgrounds in August and made his effort in the Governor’s Cup Championships one step better, posting the mile in 1:52.4. The son of Always A Virgin, went straight to the lead, let Schwartz Bros Pat ad Bradley Ferguson, moved to the lead after the quarter in :27.2, and then retook control before the half in :56.4.

From there, the distance between Big Gulp and his opponents began to increase, striding home by six and one-half lengths for the win, a final panel in :28.0. Vel Mr Nice Guy and Mike Peterson finished second followed by Jet Ace and Don Eash for third.

Big Gulp is owned by Michael, Anna, McKenzie and Ben Yoder and was a homebred by Ben Yoder. He is now nine for nine during his freshman campaign.

The Rideout Stable has had a great season on the ISFC, and they were able to score another Governor’s Cup Championship in the two-year-old trotting filly division. With multiple qualifiers in the final, Rideout opted to drive Miss Greenbacks and called upon driver Robert Taylor to guide Heres Devotion. Taylor placed the Here Comes Herbie filly on the front after the quarter in :30.0 and the duo never looked back, scoring the win by six lengths in 2:00.0, a final quarter in :28.2. Spell Cuteypie was paired with Trace Tetrick for Trainer Lester Raber and finished second over J-S Miss Ashley and Dan Shetler for third.

Heres Devotion is owned by Bill Webb, Diamond DP Standardbreds and Julie Rideout. The W R L Stables-bred freshman earned her fifth win of the season in 10 starts and is now on a three-race winning streak. Only one of five products of Here Comes Herbie that sold at public auction last year, Heres Devotion was a $8,500 purchase under the name of Deherby’ssweetlisa.

Rounding out the freshman divisions was a surprise win by Rollonbeauty from the Curtis Rice barn. The Time to Roll filly, also owned by Rice, got the early lead at the quarter in :29.3 before letting Always A Miracle and Matt Rheinheimer take over through middle fractions of :58.2 and 1:27.2. Rice had called upon Trace Tetrick to drive Rollonbeauty and he moved her back out in the stretch, rallying home to a three and one-half length win in 1:56.0, a final panel in :28.2. Always A Miracle was a strong second over Sleazy Rolls and Joey Putnam for third.

Bred by Steve Wagler, Rollonbeauty earned her fifth win of the season in 11 starts. The time in the Governor’s Cup Championship was a new career best. She was a $5,200 purchase from the Michiana Classic Yearling Sale last fall by Rice, who hails from Mississippi.

Each of the divisional winners took home the first replica of the Governor’s Cup trophy along with a blanket. The series brings to close a shortened ISFC season in 2020.