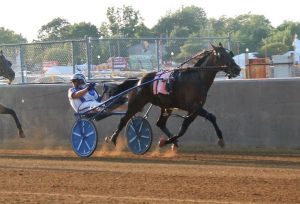 Jesse Popper and Alex Udell are shown winning at the Indiana State Fairgrounds in the ISFC Championships in 2019 at three. He was later sold as part of the Myers Stable dispersal and is now racing in Ohio. Photo by Diane Schuler

Starting from post two, Jesse Popper, guided by Kayne Kauffman, got away in the two hole and followed along behind Southwind Cruze as first half fractions of :28.0 and :58.2 were set. Traffic began to form on the outside with Infiniti AS and Jason Brewer leading the way to the three-quarters in 1:26.4. Jesse Popper was able to find the room he needed in the stretch to advance forward and earn the win by a length over Southwind Cruze and Brett Miller. Infiniti AS finished third.

Jesse Popper paid $13.00 for the win. He is now trained by Kayne Kauffman and owned by Norris Lenahan of Columbus, Ohio. The Indiana sired trotter was bred by Benjamin Graber of Woodburn, Ind.

Jesse Popper raced as a two and three-year-old under the direction of Jack Myers and driver Alex Udell, mainly concentrating on the Indiana Sired Fair Circuit. He earned 13 wins for his connections and completed his three-year-old campaign with a win in 1:55.0 at Harrah’s Hoosier Park. Jesse Popper was part of the annual dispersal sale by the Myers Stable at the Midwest Mixed Sale at the Michiana Event Center where he was purchased by Lenahan. After giving him a break from the track, the plans were altered as COVID-19 hit, leaving the trotter with limited starts last year. He has returned in 2021 and earned his first win for his new connections in his fourth start of the year. Jesse Popper now has in excess of $64,000 in earnings with 14 career starts.

In other Sunday news at Miami Valley Raceway, it was another Indiana sired trifecta in the first race of the night. Mystical Charger, a son of Jereme’s Jet, won the first race with Trevor Smith in the bike in a time of 1:53.1. Finishing second was Always a Virgin 10-year-old gelding Corner A Virgin and Dan Noble while JJ Shooter and Jeremy Smith finished third. JJ Shooter is a nine-year-old son of Indiana sire Sand Shooter.