As horses prepare for their next stop on the Indiana Sired Fair Circuit at the Clinton County Fairgrounds later this week, one horse will travel to Frankfort with a new title: track record holder. Jesse Popper, a three-year-old son of Sing Jesse Sing, trotted home for the win in 1:59.2 during the Friday, June 28 racing program at the Shelby County Fairgrounds. 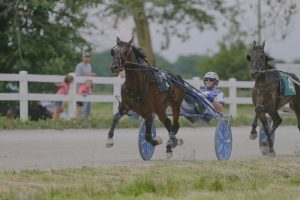 Jesse Popper and Alex Udell, shown at Converse earlier this season, set a new track record for trotters of all ages Friday, June 28 at the Shelby County Fairgrounds. Photo by Dean Gillette

Trained by Jack Myers and driven by Alex Udell, Jesse Popper rolled straight to the front and never looked back, increasing his lead by every pole and eventually winning by more than 11 lengths. His final quarter was in :29.2. Dance Hall Brawler and Joey Putnam finished second over Pante Vecchio and Doug Rideout for third.

The old record of 2:00.4 was set in 2014 by Denver Deal. The Swan for All gelding was also three at the time he set the track record at Shelbyville for trainer-driver Carl Putnam Jr.

The win at the Shelby County Fairgrounds was the third of the season for Jesse Popper. He scored a new career mark earlier this spring in 1:56.1 at Harrah’s Hoosier Park for owner Jack Myers Racing Stable. Bred by Benjamin Graber, Jesse Popper now has seven career wins in 18 career starts for Myers.