Jekyil N Hyde worked out a perfect trip to score the upset victory in the $9,000 conditioned trot at The Meadowlands Sunday, Jan. 22. The Indiana sired gelding posted a time of 1:56.2 for the win. 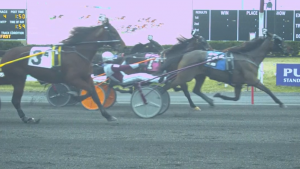 Starting from post two, Jekyil N Hyde and Joe Bongiorno didn’t have to use any early energy to get good positioning, moving over to fifth as Crazy About Pat and Brett Beckwith took over early on the inside followed by Louis and Tyler Miller on the outside at the quarter in :28.3. Louis moved over to take the lead and continued the tempo to the half in :57.4.

Jekyil N Hyde prodded Bet Big on Blue and David Miller out to get a second over trip to the lead around the final turn, and when his cover stalled, he moved three wide to get good positioning into the stretch. Jekyil N Hyde only had one horse to catch in the lane and that was Louis, who was holding on tight to the lead. Pilgrims Tide and Kubi Erzene moved up on the inside also to challenge but Jekyil N Hyde had the best momentum that carried him to the lead for the win by a half length. Louis held on for second a half length ahead of Pilgrims Tide who is owned by Indiana resident Derek Burklund for third.

Jekyil N Hyde paid $22.40 for the win. The six-year-old son of Whom Shall I Fear is owned by Christie Decotis and trained by Nicole DiConstanzo. Leon Bontrager bred the gelding, who won his first race of 2023 in his second start. Overall, he has 10 wins and more than $125,000 in earnings. His win at The Meadowlands Sunday was a new lifetime mark.

Jekyil N Hyde began his career at Harrah’s Hoosier Park at two, competing in Indiana Sires Stakes for Erv Miller and even made the Super Final. He moved to the Indiana Sired Fair Circuit at three under the direction of Jay Cross and later changed hands and began racing at The Meadows, eventually landing on the East Coast in the DiConstanzo Stable. It was only his second start at The Meadowlands.

Jekyil N Hyde is the first foal from the Credit Winner mare Hit Girl. He has a full sister named Hottotrot that is a three-year-old in 2023. His grandmother is Val Lee Woman who produced the standout trotting mare Anaffairtoremember, who had a mark of 1:53.2 and more than $611,000 in earnings.

Also a winner on the Sunday card was Major Desire, a son of Real Desire. The Indiana sired gelding sat in the two hole early on for driver David Miller before finding room in the stretch and grabbing the win in 1:53.2. JK Will Power and Andrew McCarthy finished one and one-half lengths back in second followed by Captain’s Reign and Jordan Stratton for third.

Major Desire paid $7.00 for the win. The six-year-old is owned by Jose Cervantes and was bred by Shirley and Art Le Vin. Paul Blumenfeld trains Major Desire, who has 13 career wins and nearly $150,000 in earnings. His career best time of 1:51.1 was set at Harrah’s Hoosier Park as a four-year-old in 1:51.1.