JD’s Queen Lori scored an upset win on the penultimate Saturday of the 2022 racing meet at Harrah’s Hoosier Park Saturday, Dec. 3. The Indiana sired mare, guided by Brandon Bates, scored the win in 1:54.4. 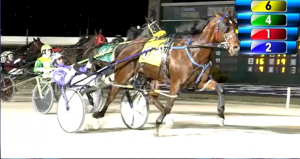 JD’s Queen Lori and Brandon Bates pace home widest of all to score a win on the next to last Saturday of the 2022 meet at Harrah’s Hoosier Park.

Starting from post six, JD’s Queen Lori was in no hurry as the gate folded. Elysium Seelster and John DeLong shot out like a rocket from the outside and had reached the lead before the turn, posting the time of 26.4 at the first marker. Brooklets Desire was under a strong hold in the second spot for Atlee Bender. JD’s Queen Lori began to move to the outside at the half in :55.4 but her cover wasn’t moving forward too quickly. She was still barely out of last place as the field turned for home at the three-quarters in 1:25.2.

In the stretch, Bates kept JD’s Queen Lori trailing the horse in front of her for several strides before tipping to the outside and letting the five-year-old pace home. She was following Fancy Riggin and Trace Tetrick, who were also closing quickly on the leaders. In the end, JD’s Queen Lori had the most momentum and rallied home in :28.1 for the win by one and three-quarter lengths. Fancy Riggin finished second with Brooklets Desire holding her own on the inside for third.

JD’s Queen Lori paid $37.80 for the win. The Panspacificflight mare is owned by Garcia Power Inc. and trained by Hector Herrera. Jacob Miller bred the mare, who earned her third win of the season. Her career best time was taken last year at four in 1:51.4. Overall, she has 13 wins and her earnings are now over the $100,000 mark with her latest win.

JD’s Queen Lori is from the final crop by Panspacificflight who was known for his mean demeanor while standing at stud in Indiana since 2007. There were nine foals registered in his final crop with only one sold at public auction. Tim Graber and Trent Stohler Stable owned the mare before she was claimed by her current connections last fall. Since joining the Herrera barn, she has competed at four different tracks but all of her wins have been recorded in Indiana.

JD’s Queen Lori is one of ten foals from the unraced Artsplace mare Southwind Diana. She is a full sister to three six figure winners, including JD’s Profiteer, JD’s Macca Lodge and Southern Flight. The family also includes Marty Tyme, who made more than $244,000 during his racing career.